Hallsands was a small coastal village with a thriving community, living under the cliffs on a high ledge above the sea protected by a wide shingle beach. It grew as a fishing village during the 18th and 19th century, reaching a population of 159 by 1891. 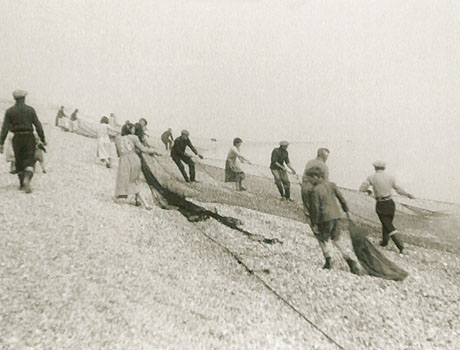 There were 37 houses in Hallsands, mainly owned by their occupants, as well as a pub, The London Inn, with stables, a post office, greengrocers, bakery, piggery and Mission Room.

It was a very hard life for the small community, which could not be sustained by fishing alone. In the winter and times of bad weather, some fishermen farmed the plots on the steep slopes at the top of the cliff.

Most village men had other trades, tailor, carpenter and blacksmith, to bring in extra income. In many ways the village was self contained.

Fishing was the main activity of Hallsands, like other villages facing Start Bay. Everyone helped when the shoals came into the bay.

A lookout watched for the tell tale oily film on the surface of the water indicating mackerel or pilchards. He would call ‘Aye boat’ and wave his bowler hat, worn just for this purpose.

All villagers, including women and children, would come out of the houses and run down onto the beach to help pull the big seine nets in, with the large catches of fish. 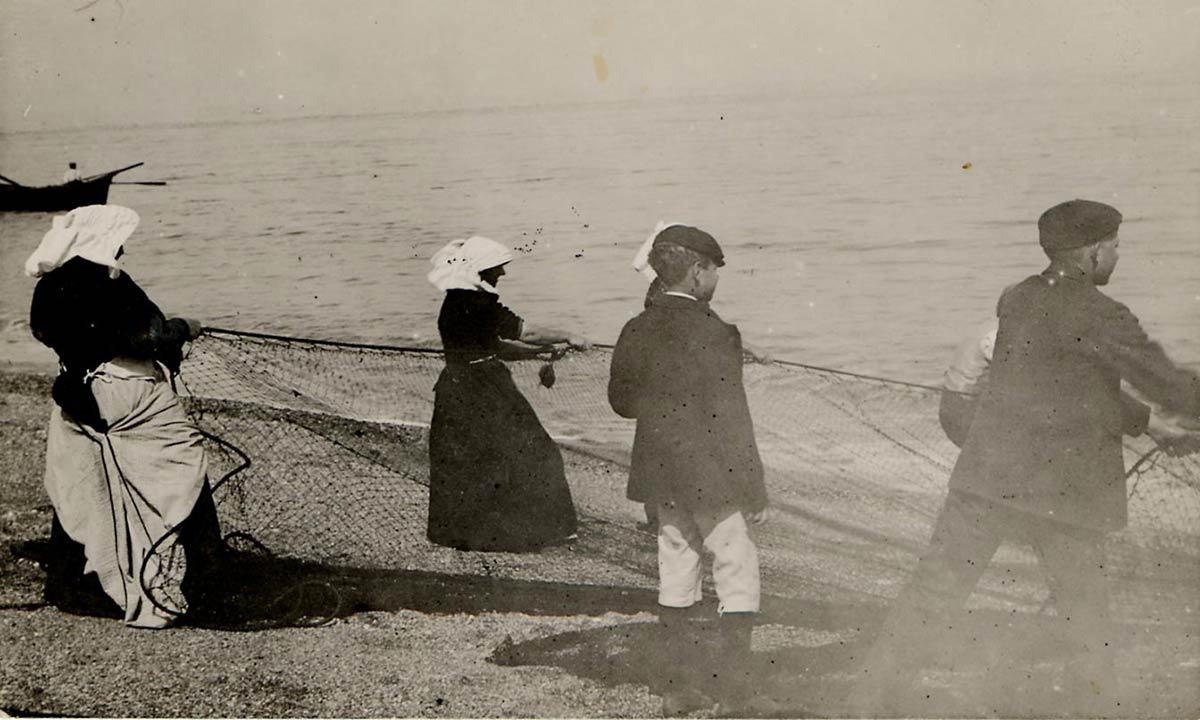 All villagers, including women and children, would come out of the houses and run down onto the beach to help pull the big seine nets in, with the large catches of fish. 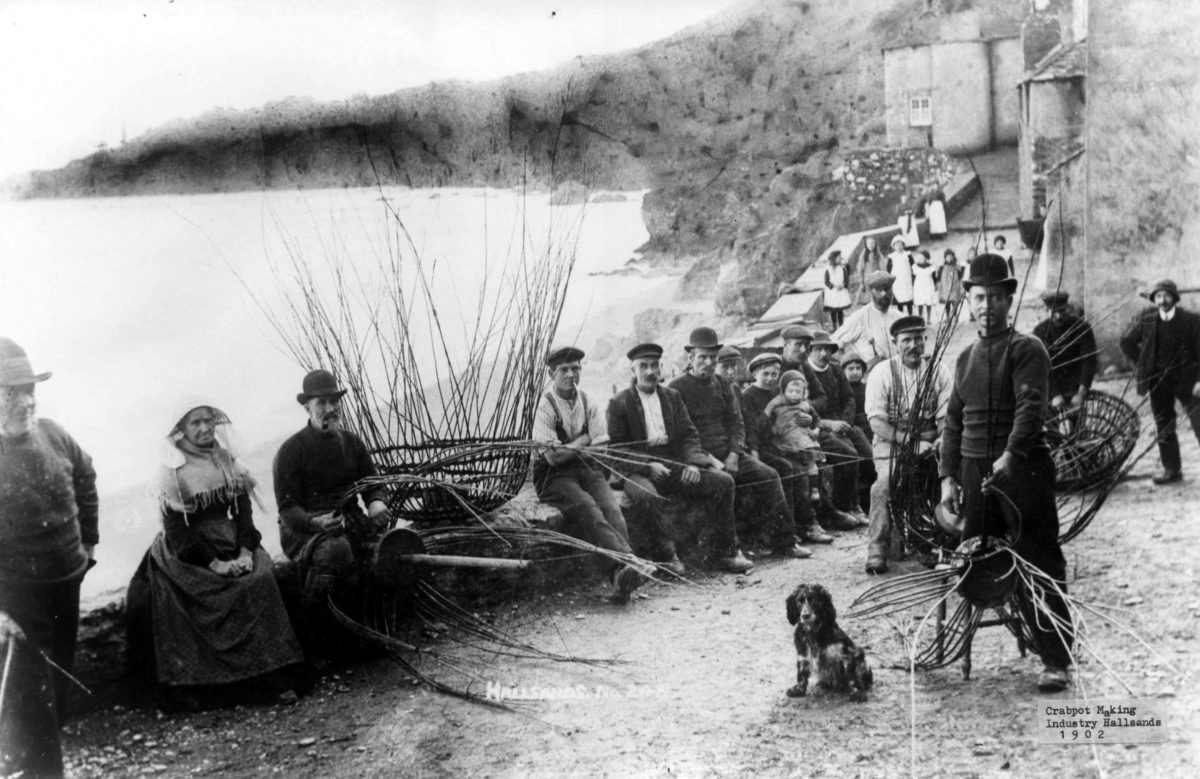 The records of The London Inn pub go back to 1784. It served its own brew of White Ale and was popular with many of the fisherman from local villages, as well as the lighthouse keepers from Start Point. Tourists from Torbay and Dartmouth would be entertained when the pleasure steamers made regular stop-offs. 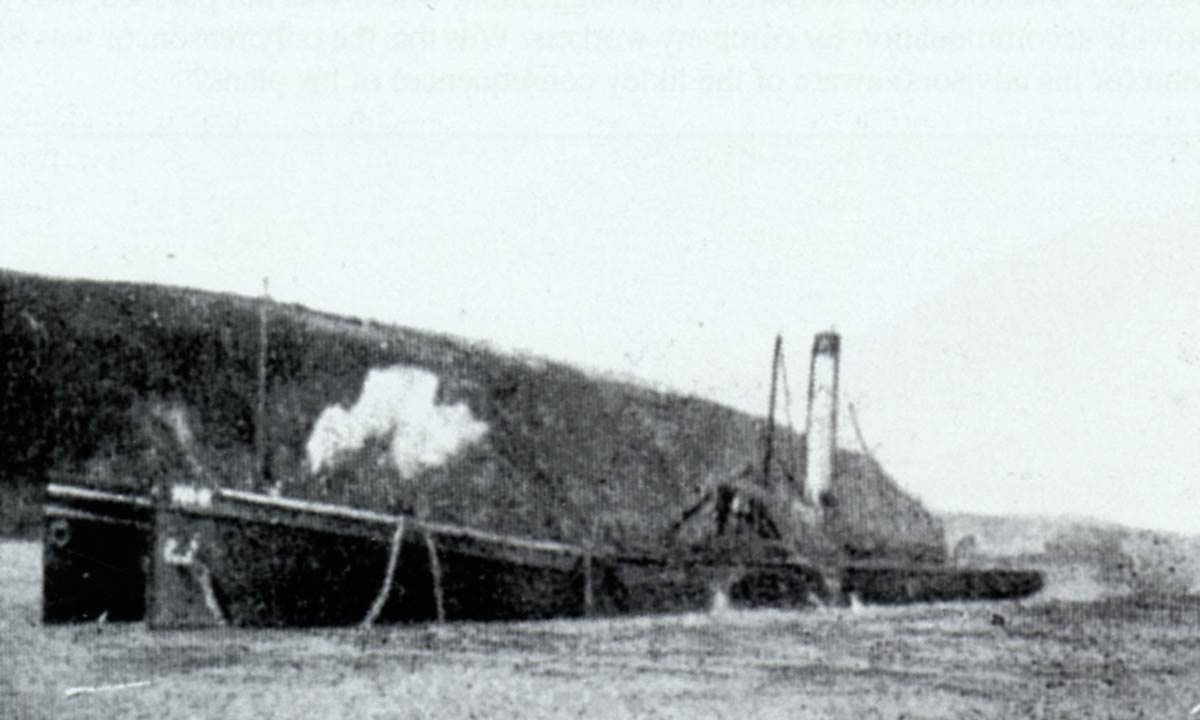 In 1894 the Royal Navy made plans to extend Devonport Dockyard at Keyham, which needed around 400,000 cubic metres of shingle. Extracting it from Start Bay was decided to be ‘a sound business proposition’ and a planning application was made without villagers being aware.

The contract was awarded to Sir John Jackson and dredging began in April 1897, at an average of 1600 tonnes per day. The dredging area covered a 1100m stretch from just north of the village to Tinsey Head, the promontory between North Hallsands and Beesands. 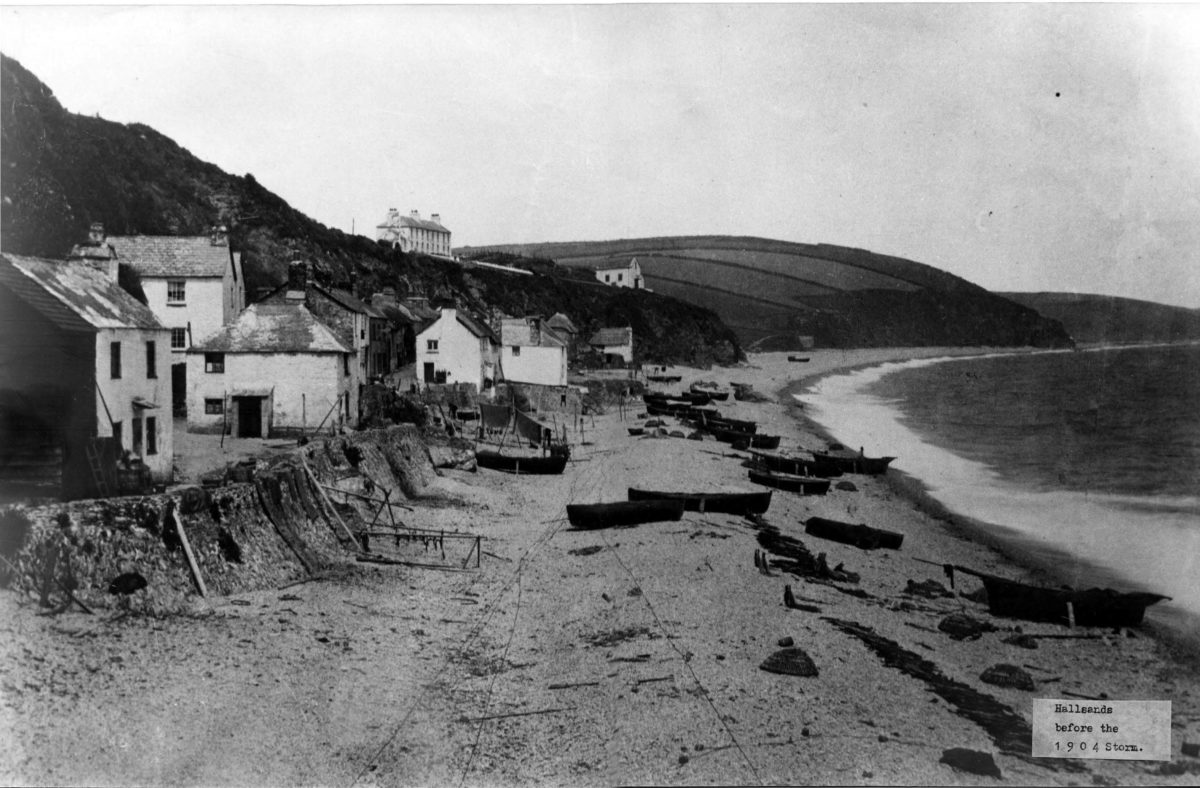 By the end of April, beginning of May, the removal of shingle had altered the shape and angle of the beach, so much that the low water mark moved until it was actually further inland than the old high water mark. Holes left behind were not being filled in and villagers asked their local MP for help. 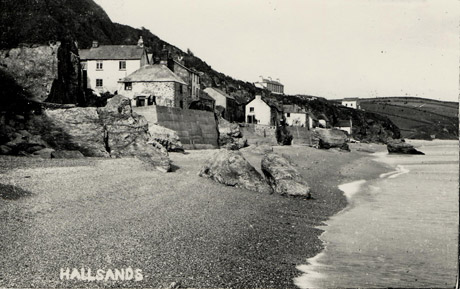 Over the next few years, there were more pleas for help, enquiries and damage. In November 1900 the villagers petitioned their MP about damage to the houses. At spring high tide the sea now came within 3ft of the village rather than the 70-80ft it had been before dredging started. Cracks started to appear in houses at the south end of the village and the sea wall was undermined.

Following another Board of Trade Inspection Jackson was ordered to provide new concrete footings to the sea wall and a concrete slipway for the boats, to compensate for the lack of beach.

There followed more damage to the sea walls which were built to protect the houses, and the houses themselves. After much campaigning and protesting by the villagers and their supporters, on 8th January 1902, the licence to dredge was revoked.

After nearly 5 years of dredging, around 650,000 tonnes of shingle were removed from the beach. 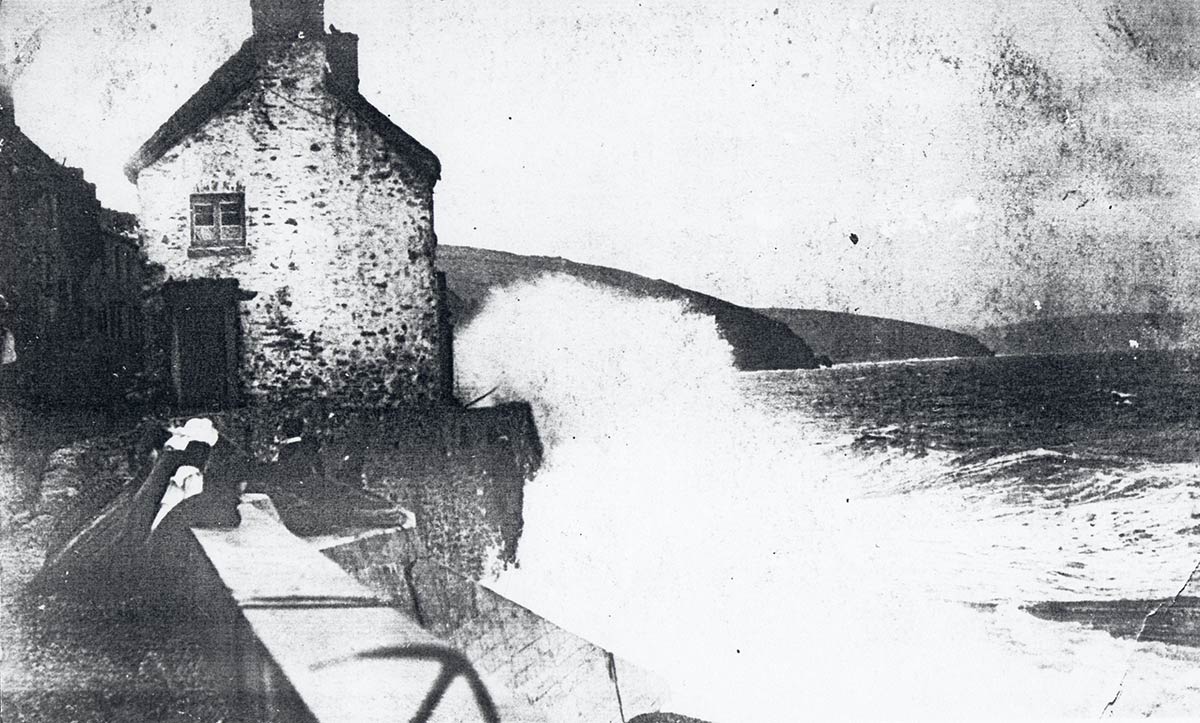 In the years that followed, some houses suffered further damage, including the London Inn, which lost the kitchen, a bedroom and the cellars. 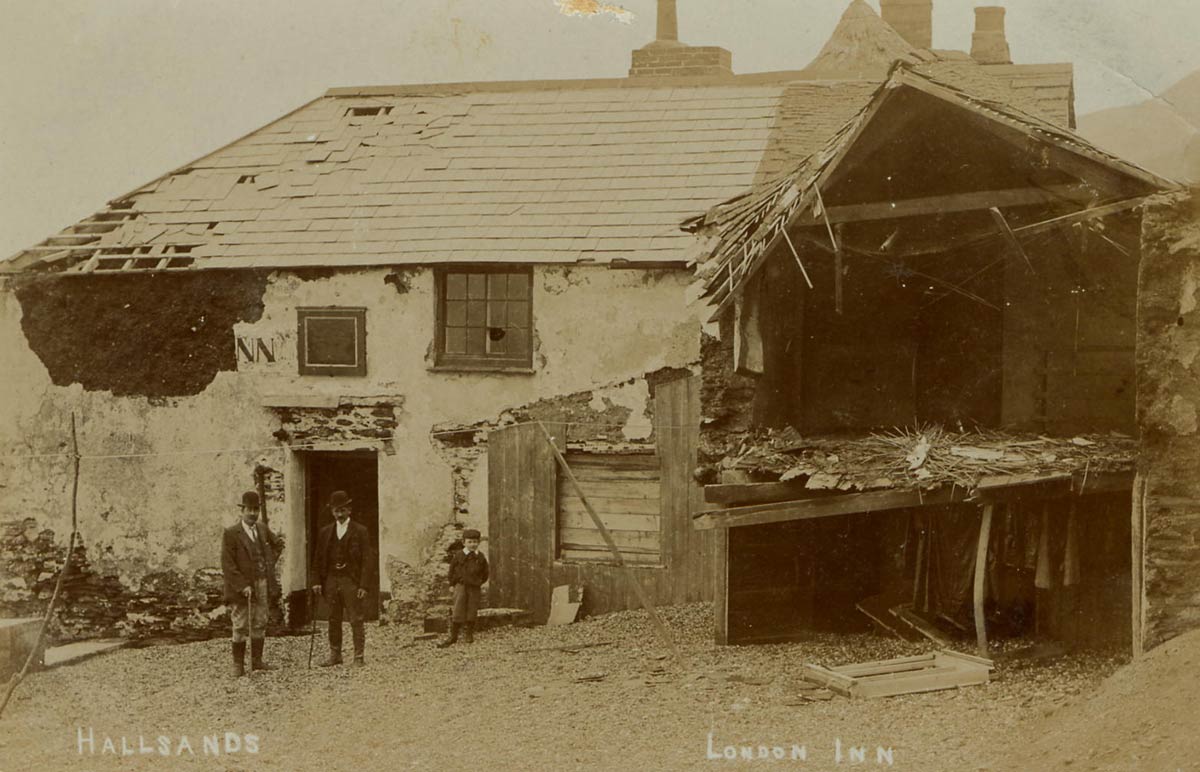 A new stronger sea wall was put in place in 1906 to protect the remaining 25 cottages and their 93 inhabitants. The four families who were washed out of their homes were rehoused in new cottages on the cliff top next to the chapel, known as the Mildmay Cottages, which were built with money raised in the Western Morning News appeal fund.

Although the population fell to 79, villagers grew more confident in their strong new sea wall and enjoyed several years of peace. 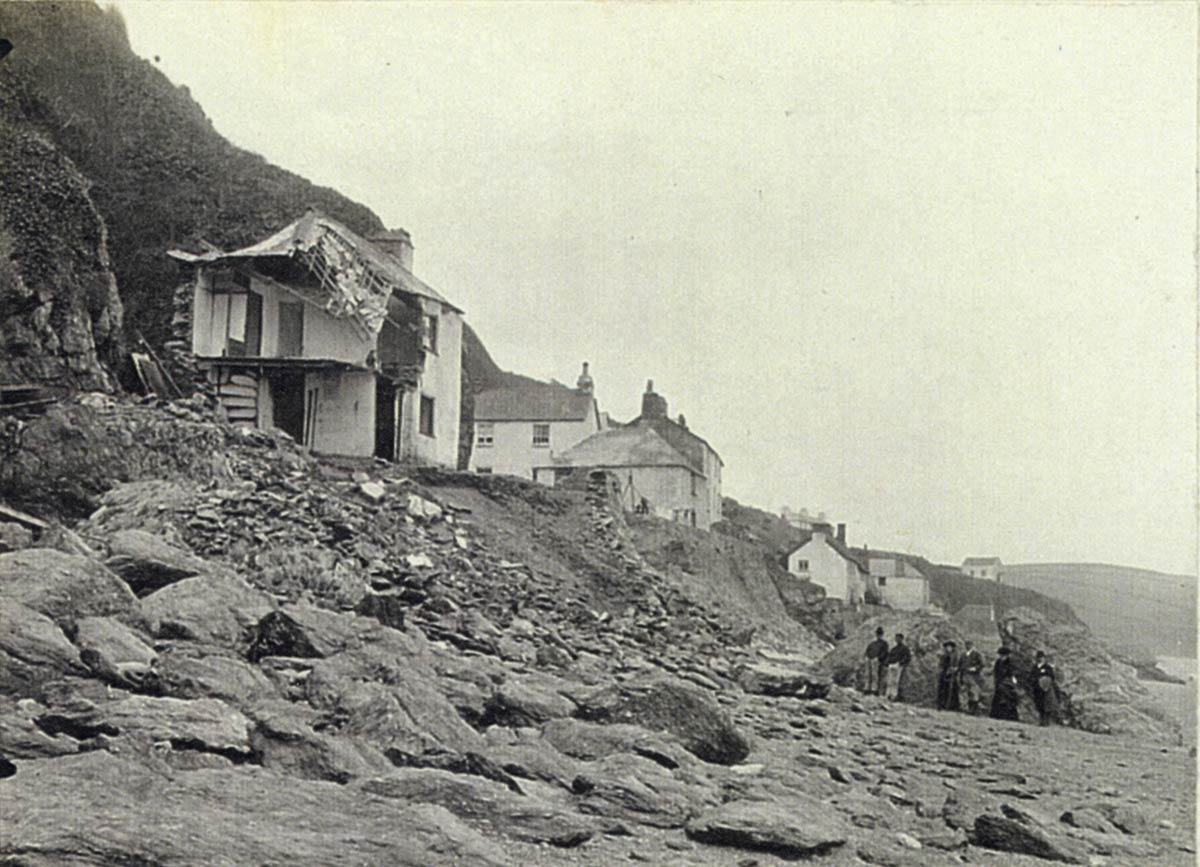 That was until the 26th January 1917. The fishermen, expecting worsening gales, storms and a high tide, hauled the boats high up in to the village street and battened them down. The children were evacuated to the Mildmay Cottages.

At 8pm spring tides brought huge waves which crashed into the houses at roof height and destroyed the buildings behind the sea walls from above. The houses built on the empty chasms in the ledge collapsed and those on the rocks were battered by wind, waves and stones. The villagers feared for their lives.

By midnight, four houses were totally demolished and none survived intact. Amazingly, all 79 villagers survived and scrambled to safety during a lull in the storm at low tide. Dawn on 27th January revealed a devastating picture, the sea was strewn with timber and broken furniture.

The sea walls had held, otherwise many more houses, and possibly lives, would have been lost. It was likely that the next high tide would destroy all that remained so with the wind still raging, villagers worked to salvage what they could.

On 28th January 1917, with the next high tide, the walls broke and the village was destroyed. Only one house remained in any way habitable, the highest in the village, that of the Prettyjohn family.

The Kingsbridge Gazette that day led with the headline ‘The beach went to Devonport and the cottages went to the sea’.

Various offers of compensation were made and some new houses were built. The story continued to be uncovered as recently as 2002 when a local journalist uncovered reports at Kew record office from the enquiry. 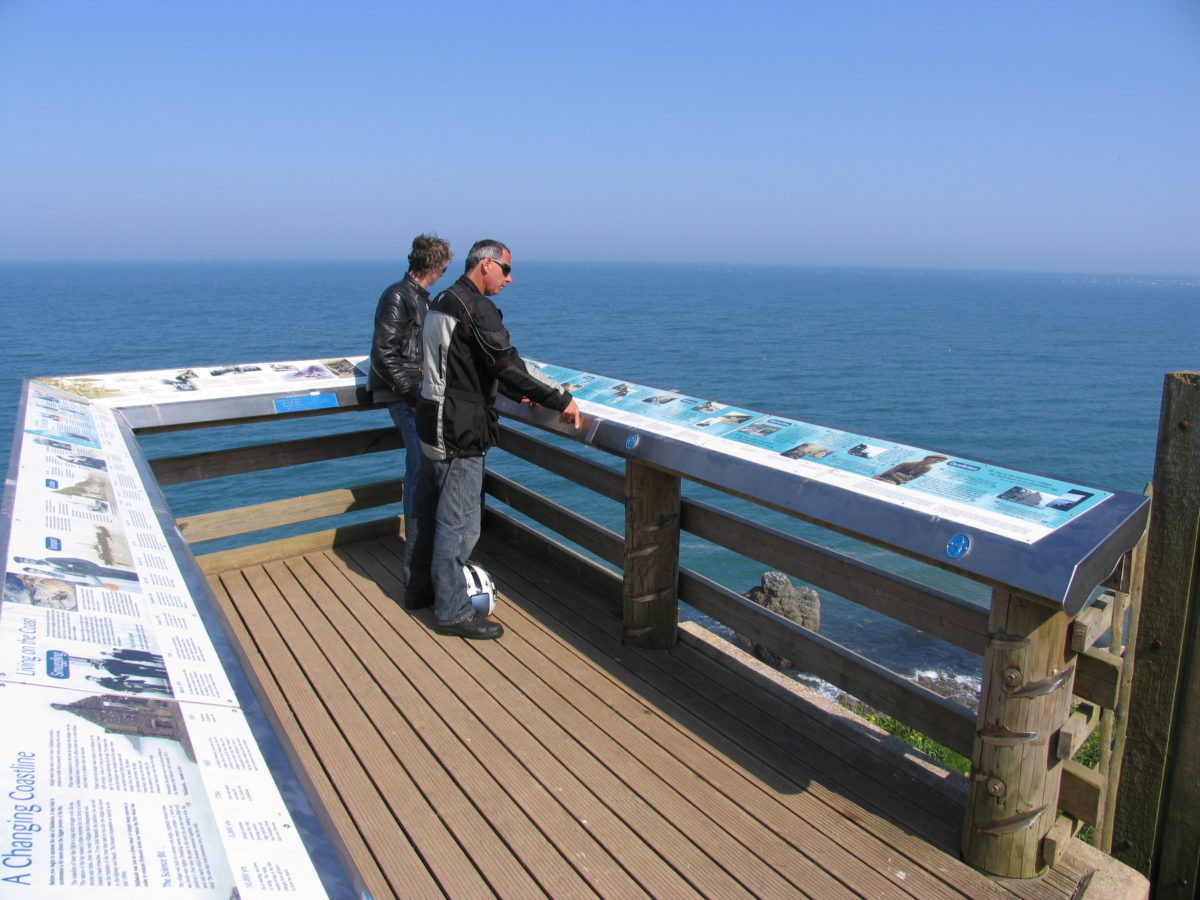 Discover the story for yourself

The story of Hallsands is told in detail at the viewing platform over the ruined village. Find out all about the village and living and working there, including the incredible story of the Trout sisters.

The tale of the demise of the village, the damage, the attempts at defending it against the sea, its destruction and eventual dereliction is shown in pictures, photos and words of people there at the time.

Parts of some of the houses still remain and can be seen from the viewing platform, although access down to the village is no longer permitted due to the unstable cliffs and continued erosion of the coastline.

You can download information found on the viewing platform on the right of this page.