The harbour as it looks now.

With its commanding position overlooking Plymouth Sound, the area around Bovisand has had a busy military past over the last 500 years. There is a wealth of buildings, structures and earthworks which tell of the efforts to defend this corner of England.

The earliest surviving feature here at Bovisand was not a gun battery but the small harbour, completed in 1824. From here, tenders supplied warships anchored offshore with fresh drinking water. The water was piped underground to the harbour from a storage reservoir just up the valley.

The harbour around 1920-30s. Many visitors would come here by boat from Plymouth Barbican. 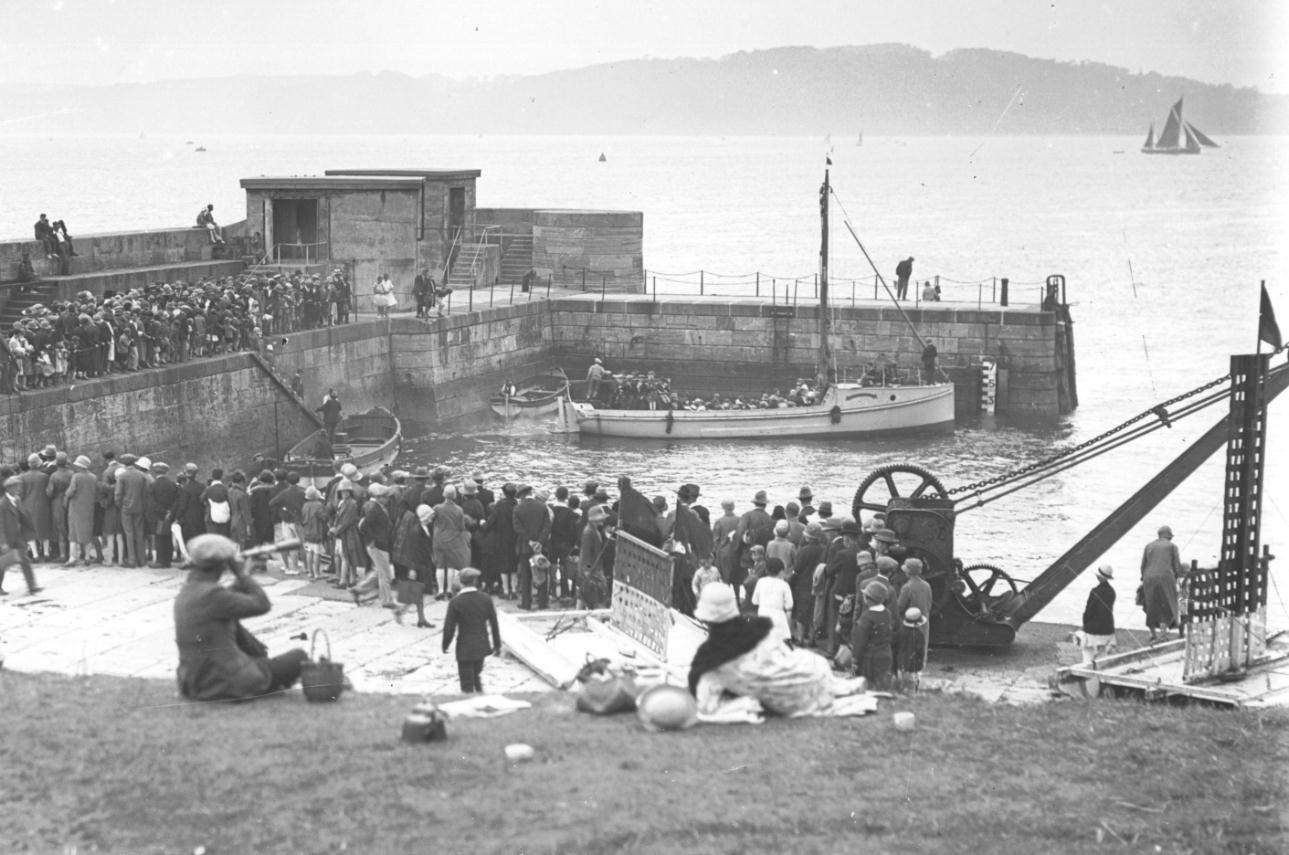 Defence of the Realm

In the mid 19th Century, the British government became increasingly concerned about the threat of French naval attack. Military technology was advancing rapidly. The Royal Commission on the Defences of the United Kingdom, set up in 1859, recommended a huge programme to fortify Plymouth with “a ring of fire”.

Bovisand was to be right at the heart of the new plans. Along with the Breakwater Fort and Fort Picklecombe on the Cornwall side of the Sound, they formed the seaward defences of the city and the Royal Dockyards. 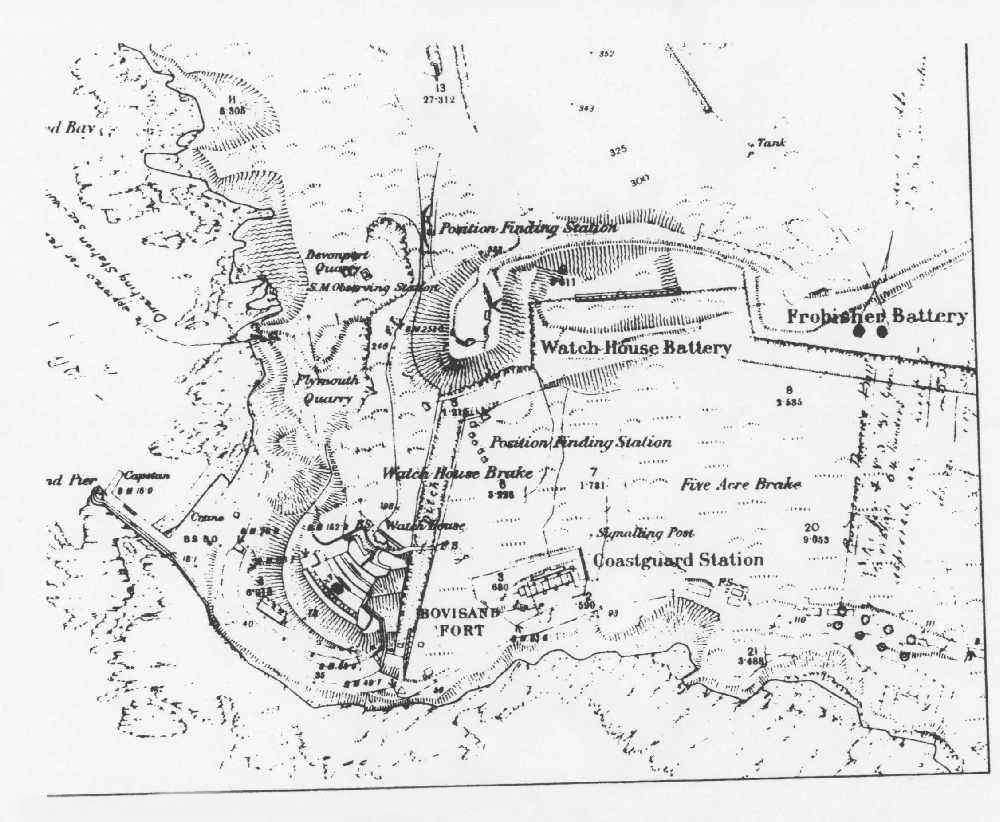 Staddon Point is the earliest of the gun batteries surviving here, sited higher up the hill. It took two years to build (1845- 47) at a cost of £14,000. The building had three tiers with large towers at each end of the lower level. There were three officers and 90 men billeted here, manning twelve 18-pounder guns covering the eastern side of the new breakwater. To protect the gun batteries from landward attack, a deep dry ditch was cut up the hillside, past the battery and round to the east. If you follow the coast path from the coastguard cottages, you cross a footbridge over the ditch. You can still see small slits in the walls at the bottom and the top of the ditch. These were covered walkways called ‘caponiers’ used by soldiers to defend the ditch with musket fire.

Fort Bovisand is the lower building on the hill between Bovisand beach and the entrance to the Plymouth Sound. It consists of 23 gun rooms, called casemates, along with many underground corridors and magazines for storing arms, ammunition and explosives. It was built from 1861 to 1869 from Dartmoor granite and cost £58,000. It is said to be the best presented casemated battery of the 1859 Commission in the country and was continually occupied up until 1956.

The fort was originally armed with 25-ton rifled muzzle-loading (RML) guns. They were forged in Woolwich Arsenal, brought down by sea and manhandled from the harbour into the casemates. The guns fired through openings, or embrasures, in the one metre thick iron shields set in the archways of the casemates. The guns were heavy and cumbersome and had a slow rate of fire. The loading and firing drill took four minutes – hence the need for 23 guns to provide a continuous barrage of fire.

150-200 artillery men were stationed at the Fort. Each of the 23 guns had a detachment of seven men plus a Gun Captain to operate it. The eight men slept in the casemate and the repetitive daily regime of drills and maintenance was strict and disciplined. When Fort Bovisand was completed, Staddon Point Battery was no longer needed as a main gun battery and was used instead as additional living quarters.

(1873 sketch showing how the guns were transported from Woolwich & Inside a casemates, showing the thick shield on the front and the gun embrasure)

In the 1890s, new guns were introduced which were quicker to load and fire. Six Quick Firing (QF) 6-pounder guns were installed on the roof of the Fort and 2 Maxim guns were put in the towers.

The 23 old RML guns were removed over the next few years and by 1905 all the casemates were empty or adapted to other uses or stores.

During World War I searchlights were installed and additional troops were stationed here due to fears of a submarine attack. In World War II, the site was much busier. 115 personnel were based here and six searchlights scanned the skies.

The last artillery changes came in 1942, replacing the QF guns with twin 6-pounder guns. They could fire 780 rounds a minute and engage the enemy motor torpedo boats. They were installed on the roof of the casemates.

The Fort and Staddon Point Battery were decommissioned in 1956 and stood unused for some years. Then in 1970 Fort Bovisand was leased by the MoD to Plymouth Ocean Projects, to run training courses for professional and amateur divers. Repairs were made, services installed and the buildings adapted to stores and workshops.

The Fort itself is not open to the public and is sadly in a bad state of repair. The Fort Bovisand Trust has been set up to try to raise funds to restore parts of the fort and open parts up as an learning and interpretation centre.